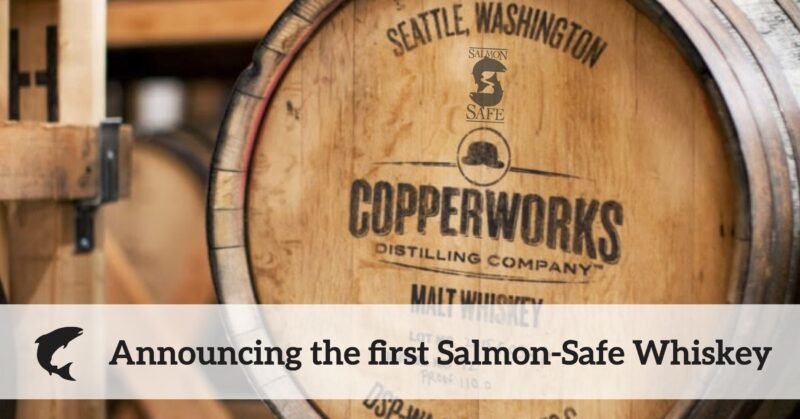 Showcasing a single variety barley from H.T. Rea Farm, a Salmon-Safe certified family farm on the Oregon side of the Walla Walla valley

Salmon-Safe in partnership with Copperworks Distilling and Mainstem Malt today announced the release of Copperworks’ Whiskey Release 039—an American Single Malt Whiskey that helps protect Washington’s rivers and watersheds. The release is the nation’s first whiskey made with Salmon-Safe ingredients.

“We love supporting farmers that help protect our watersheds,” said Copperworks Distilling Co. co-founder and president Jason Parker, “and as it turns out, the varietal from this farm has produced some beautiful whiskey. We’re tasting flavors that reflect cedar and fruity red wine, which are dramatically different from other grains that we use. We’re really excited to release this whiskey, and in turn, support farmers that are protecting our planet.”

In Walla Walla, Salmon-Safe certified farmland produces barley and wheat thanks to the work of Mainstem Malt, a company that recruits landowners to adopt the certification so that it can provide single varieties of Salmon-Safe grains, from single family-farms, to breweries and distilleries. The company worked with H.T. Rea Farm to grow the Genie malt used in Copperworks’ American SIngle Malt Whiskey Release 039. As part of its certification, the farm places buffers around tributaries—which connect to the Columbia River—restricts hazardous chemicals and pesticides, adopts minimum tilling practices, and has removed in-stream crossings to control erosion.

“The Genie malt in this whiskey is really a place-based experiment,” said Mainstem Malt founder, Phil Neumann. “Not only do we get to taste the ‘terroir’ of dry-farmed grain from Walla Walla, we know that this grain comes from a farm that intentionally protects the land and water downstream through its commitment to Salmon-Safe farming practices. I’ll drink to that!”

“For Salmon-Safe, environmentally innovative industry partners like Copperworks and Mainstem are essential to inspire a market shift towards water quality protection and habitat conservation on Northwest farms,” said Dan Kent, Salmon-Safe’s Executive Director. “We’ve seen in the wine and craft beer sector how Salmon-Safe messaging can be a powerful message in the marketplace.”

Enjoying the fruits of fresh hop season? Here's one you should absolutely add to your list! 🌳🐰🌾🍺

Made with @salmonsafe fresh Strata hops from Roy Farms and malt from Mainstem.

Happy #WineWednesday! Week 9 of the #SalmonSafeWineTour is featuring @OsoyoosLarose! Located in Osoyoos, BC they have been certified since 2019. They implemented a no-till approach, planted native species, and limited the use of pesticides. Learn more: https://www.osoyooslarose.com/

Salmon-Safe is gearing up f...