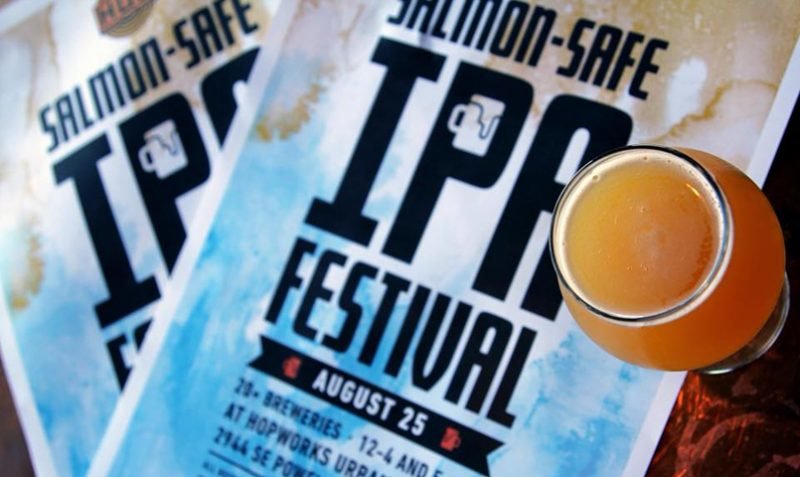 Salmon-Safe teamed up with Portland’s Hopworks Urban Brewery and twenty regional & national brewers on a sold out, capacity crowd first ever Salmon-Safe IPA Festival that was held at HUB  on August 25.

Co-presented by HUB, the Salmon-Safe IPA Festival was the first festival of it’s kind, bringing together breweries – large and small – to make hop-forward beers that are all brewed with Salmon-Safe certified ingredients.

An IPA brewed to help raise awareness for our fish friends facing growing dangers to their natural habitats. The combination of Salmon-Safe Azacca, Citra and Mosaic hops make this beer a pungently dank juice bomb. 7.2%

They say the grass is always greener…and with a big nose of fruit punch & orange peel laid over flavors of dank pine and spring flowers, it’s soo true. Brewed with Centennial, Jarrylo and Meridian hops from our good pals at Crosby Hop Farm. 6.2%

An English-ish style Session IPA designed and brewed by our QA manager Greg Soto. We love getting all of our staff involved in designing and brewing our beers. Athena English Pale, Pilsner, and Walla Walla Hard Red Light Munich malt from Mainstem Malt. Mt. Hood, Cascade, and Amarillo hops all come from Crosby Hop Farm.

We squeezed all the juicy, citrusy goodness out of two classic hops we’ve all come to know and love but kept the bitterness at bay, letting the light shine through its malty bedrock. Brewed with Centennial & Cascade Hops from Goschie Farms and Pilsner Malt from Mainstem Malt. 6%

A classic English IPA brewed with a rich, crisp and complex malt profile and a medium body. Nugget, Tettnang and Crystal hops deliver citrus notes with subtle herbal flavors and a delicate floral aroma. Salmon-Safe hops from Crosby and Tettnang from Goschie Farms. 6%

IPA brewed with all organic hops and local malts. All ingredients are Salmon Safe certified, including Athena 2-Row Pilsner & Genie Barley from the Johns Ranch farm in Athena, OR and Walla Walla, Soft White Pale & 102 Wheat from H.T. REA Farming in Walla Walla, WA. Hops are organic Mosaic/Ekuanot blend from Cowiche Valley outside of Yakima, WA. 6.5%

Our HopLips Session IPA is brewed with delicious and juicy Simcoe, Crystal and Brewers Gold hops from Sodbuster Farms and Loftus Ranches. 5.5%

Pilsner brewed with Crystal hops and aged on fresh Hallertauer Abiqua hops. The hops and Lyon 2-Row malt all come from a single estate, Goschie Farms in Silverton, Oregon.

The original “Willamette Meridian” was established as a guide for the early Oregon settlers populating this territory. Our version, in beer form, is a guide to using Salmon-Safe ingredients to create the beverage that so many of us enjoy in the Pacific Northwest. We used grain grown in Walla Walla Washington and dosed it with generous amounts of Salmon-Safe Crystal, Azacca, Meridian and Willamette hops. 6.5%

Floral and Citrus notes abound in this IPA that is as refreshing as a swim upstream. Chinook, Centennial, Willamette, Columbus and Amarillo hops spawn a unique bouquet. Hops come from Indie Hops and Crosby Hop Farm. 5.7%

Quirk Brewing – Bigger on the Inside IPA

This IPA incorporates the full, nutty malt flavor of Mainstem Genie Pale malt with a blend of Azacca, Amarillo, Centennial and Crystal hops from Crosby Hop Farm for a delicious aroma of Pineapple and Citrus. 6.5%

This NW style IPA has a light malt base and is bittered with Bravo, whirl-pooled with Mosaic, and dry-hopped with Experimental Hop HBC-692 & Citra for a burst of fruity, tropical, hoppy goodness. The Columbia River connects the various rivers and tributaries that feed the Washington and Oregon farms where all of the ingredients were sourced. Hops sourced from Roy Farms and Perrault Farms. Athena Pilsner malt and hard red light wheat from Mainstem Malt. 7.5%

Worthy Brewing – Call of the Wild

Lemon & lime citrus hop aromas meet with biscuit and sweet wheat flavors in this highly attenuated brew. The malt all comes from Mainstem and the beer is dry-hopped with Chinook and Cascade hops from Indie Hops and Azacca from Roy Farms. 5.8%

“We are excited that more than 20 of our industry friends joined us in brewing original IPAs using ingredients that help protect our beautiful planet,” said Christian Ettinger, HUB’s Brewmaster and Founder. “The relationship between clean and abundant water and great beer is something to protect and celebrate.”

Once in the environment, tire particles threaten human and wildlife health through countless pathways. https://bit.ly/3ZTzJ9L

Yakima Chief Hops and @salmonsafe teamed up for a two-part special episode on the Bigger Than Beer podcast. PART II of the Salmon Safe Hops & Beer episode is out now!

In this episode of the

Salmon-Safe is gearing up f...