Mayor Charlie Hales today announced that the City of Portland has taken action across city operations to earn Salmon-Safe certification, making it the first city in the world to achieve the third-party designation for its systematic approach to improving water quality and restoring salmon habitat.

Download Salmon-Safe Certification Report for the City of Portland (2016)

“We are now a Salmon-Safe city. I am proud of our City bureaus for rising to the occasion and fulfilling the pledge I made in 2013 that Portland would become the first city to be certified Salmon-Safe, advancing our environmental leadership in watershed health and salmon recovery,” Mayor Charlie Hales said. “Portland is a city of rivers, and our economic wellbeing and quality of life rise with the health of the Willamette and Columbia, our many creeks and our native endangered salmon. I am proud to leave a Salmon-Safe legacy that is now embedded in city operations.” 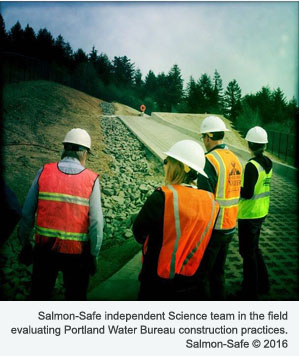 The City of Portland’s designation means that city operations have conditionally passed the organization’s comprehensive science-based evaluation of land and water management practices. Where improvement is needed, facility managers are committing to additional actions to limit water pollution, conserve water use and restore habitat over the next five years, at which time Salmon-Safe will re-inspect City operations for recertification.

But that’s not enough, said Hales: “I also call on our fellow West Coast cities to join us and become Salmon-Safe cities. As the salmon teach us, we are all connected. As our indigenous people and tribes remind us, water is life. Salmon-Safe’s third party audit and actions are especially relevant in the age of climate change when it is imperative to conserve water and strengthen the resilience of our natural systems.”

“Salmon-Safe’s third-party audit shows that the City of Portland is on the cutting edge of West Coast cities in taking a holistic approach to its watershed," said Dan Kent, Salmon-Safe executive director. "Taken together, the city’s actions represent an integrated approach and meaningful commitment to the health of the Willamette River and our urban watershed.”

Salmon-Safe certification affects day-to-day city operations that potentially impact downstream water quality as well as the construction and maintenance of City-managed properties, including City-owned buildings and the City’s fleet of vehicles and bureau maintenance yards.

In practice it means systems are being implemented to further conserve water, reduce pesticide use, improve erosion control and increase installation of rain gardens and other “green infrastructure” to ensure storm water runoff is clean as it filters into wetlands, groundwater, nearby tributaries and the Willamette and Columbia rivers.

Participation expanded in 2015 to include Portland Fire and Rescue facilities and the Office of Management and Finance, which manages the City’s buildings. The Bureau of Planning and Sustainability (BPS) has served as project manager and coordinator.

Spirit Mountain Community Fund provided the initial support for the City’s Salmon-Safe evaluation. Implementation will be woven into bureau operations and capital improvements, and require no separate funding. Instead, future actions, such as the installation of rain gardens and habitat restoration practices, will be addressed through ongoing bureau funding and individual bureau capital improvement project requests.

Cheers to salmon-safe summer just around the corner! Our friends at @raysboathouse have a new #salmonsafe and LIVE certified Chardonnay in partnership with Willamette Valley Vineyards, perfect for celebrating in rain or shine: https://www.rays.com/rayschardonnay/

Brewed with @salmonsafe hops to help Salmon continue to enter through our Golden Gate and have a home here along side us. #drinklocal #drinksustainbly #sustainablefuture