Los Angeles Times, December 2006
This is a city that takes its salmon very seriously – as a delicacy, and as a regional icon. Now a new citywide ad campaign is asking grocery shoppers to step up and do their part to save the salmon. The bus ads remind shoppers to look for the "Salmon-Safe" label, which blesses fresh locally produced eggs, milk, wine and produce. This label assures the customer that the agricultural practices of the farm or vineyard in question do not harm salmon habitat. It’s a message that seems tailor-made for this city, where organic coffee shops, farmers markets and agricultural cooperatives flourish… 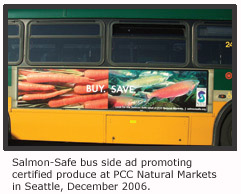 Read the article at the LA Times.

Seattle tries a new hook to save salmon

SEATTLE — This is a city that takes its salmon very seriously — as a delicacy, and as a regional icon.

Now a new citywide ad campaign is asking grocery shoppers to step up and do their part to save the salmon.

The bus ads remind shoppers to look for the "Salmon-Safe" label, which blesses fresh locally produced eggs, milk, wine and produce. This label assures the customer that the agricultural practices of the farm or vineyard in question do not harm salmon habitat.

It’s a message that seems tailor-made for this city, where organic coffee shops, farmers markets and agricultural cooperatives flourish.

Stewardship Partners, a local nonprofit that works with private landowners to restore and preserve the natural landscape, has been running the Salmon-Safe program in the Seattle area since 2004. The bus campaign and recent radio spots are its first large-scale promotions of the label.

"We’ve been scaling up," said Stewardship Partners’ program director, Larry Nussbaum. "We had to have enough producers in the program to meet demand before we could run this kind of a campaign."

The Salmon-Safe program dates to 1995, when it was developed at the Pacific Rivers Council. Now the certification standards are set by Salmon-Safe Inc., a nonprofit in Portland, Ore., that looks for groups like Stewardship Partners to administer the program locally. Oregon, Washington and Marin County are among its partners.

Overall, the program has certified more than 150 farms and wineries.

The certification inspection takes into account a producer’s water use, erosion control, pesticide management, and maintenance of biological diversity, among other factors. A producer need not be certified organic to qualify, though many are.

Salmon-Safe’s managing director, Dan Kent, says the program’s growth and success in Seattle has been "phenomenal."

Thirty farms, vineyards and dairies have been certified in the Puget Sound area.

Nussbaum attributed Seattle’s interest in the program to a number of factors — primarily public awareness and concern for local agriculture.

"There is a huge amount of buzz here around the whole issue of salmon. The government is spending millions of dollars on programs to restore wild salmon habitat — and this is a program that gives private landowners a way to be a part of that effort," Nussbaum said. "We also have two big trends — growth in the natural organic foods market and even more growth in the local sustainable agriculture movement — that have been huge."

But PCC Natural Markets’ merchandising director, Paul Schmidt, does acknowledge: "Our customers were a little confused in the beginning. They’d ask, ‘How can lettuce be salmon-safe?’ " PCC describes itself as the largest natural foods cooperative market in the United States, with eight stores in the Seattle area and more than 40,000 members.

"But now that we’ve explained the program — that it is about the farmers and their practices — we’ve seen a strong response," Schmidt said. PCC, which joined the Salmon-Safe campaign two years ago, has used its membership magazine, monthly specials and its staffers to explain the program to customers.

In Oregon, the Salmon-Safe certification has been expanded to cover the land management practices of businesses, government entities and universities. Nike’s corporate campus in Beaverton, Ore., and Portland’s park system are among the certified organizations. Kent says he expects to see this part of the program expand to Seattle as well.

He said it was hard to quantify the success of the label in terms of the number of fish saved, but he did note that when partner retailers such as the PCC co-op ran educational promotions about the label, "we typically see sales of certified products go up 15 to 20%."

"The salmon is a symbol to rally round," he said. "Salmon are an iconic species; the label represents the practices that protect and preserve water quality and habit, which benefits the whole of the watershed."

Not everyone who participates has seen a boost. Gerard Bentryn, owner of Bainbridge Island Vineyards and Winery, just across the bay from Seattle, went through the certification process last year; his winery’s participation is advertised on its website, and the Salmon-Safe label is displayed on its wine bottles.

"I’m disappointed, to tell you the truth," he said. "No one has ever asked me about it." Still, Bentryn, a former water resource manager with the National Park Service, said he was committed to the ideals of the program, and to salmon-safe practices.

"I hope it will have an impact, that people will start to think about what they consume in environmental terms," he said.

William Ruckelshaus, the chairman of Washington state’s Salmon Recovery Funding Board and a former Environmental Protection Agency chief, said certification programs such as the Salmon-Safe effort could make a difference.

"These programs are really just in their infancy," he said. "It’s going to take a number of years yet before we can see how far their reach will be."

Lisa Wade, 37, first saw the Salmon-Safe label at a local farmers market in the summer. Shopping at a Seattle PCC this week, she said the label made her feel that she was doing something to help environmentally sustainable local agriculture.

"Do I think I’m saving a salmon? I don’t know," she said. "But at least I know the product is local, and that I’m participating in something that’s trying to address the problem."

Planting trees is just one thing we can do to improve the health of the water in our region. Visit http://www.water100project.com to learn about more solutions for a clean and resilient Puget Sound. #Water100 @Boeing @PSPartnership

Thanks for the shout out @Conserve_WA!

Every place matters in keeping our rivers clean. Being @salmonsafe improves how salmon live down below. https://bit.ly/2FY7W3u https://twitter.com/Conserve_WA/status/1308481213154422785

Salmon in the City Seattle:...

The Challenge for Our Time